Melissa Mitzner met her son, Tiago, while working at a local daycare facility.

Melissa was assigned to spend one-on-one time with Tiago who suffers from damage to his vision, hearing and intellectual capacity due to cerebral palsy and a bout of meningitis when he was an infant. In March 2009, when the opportunity arose, Melissa and her husband adopted Tiago as well as his brother Clayton. Although she had been told by doctors that Tiago would likely not walk or talk, his parents have helped him beat expectations.

At fourteen years old, Tiago has 86% of his vision thanks to glasses. He walks just fine and has cochlear implants that have improved his hearing. Tiago does struggle with self-harming behaviors. But these are controlled when he wears plastic inflatable sleeves. With the sleeves, he can remain free from restraint and participate in the activities he loves.

Tiago’s arm sleeves are expensive and need to be replaced often. Their cost is not covered by the family’s health insurance. The Relief Foundation purchased arm bands for Tiago and even found them at a more affordable price.

“The day I found out about the Outer Banks Relief Foundation was the biggest relief because I didn’t think there were people out there to help. Ever since that day, they have been there for us.”

Tiago attends middle school with his arm sleeves in place. When he returns home, he enjoys sharing laughs with his parents, swinging with them in their hammock, and using their leaf blower to keep the streets of his neighborhood “clean!” 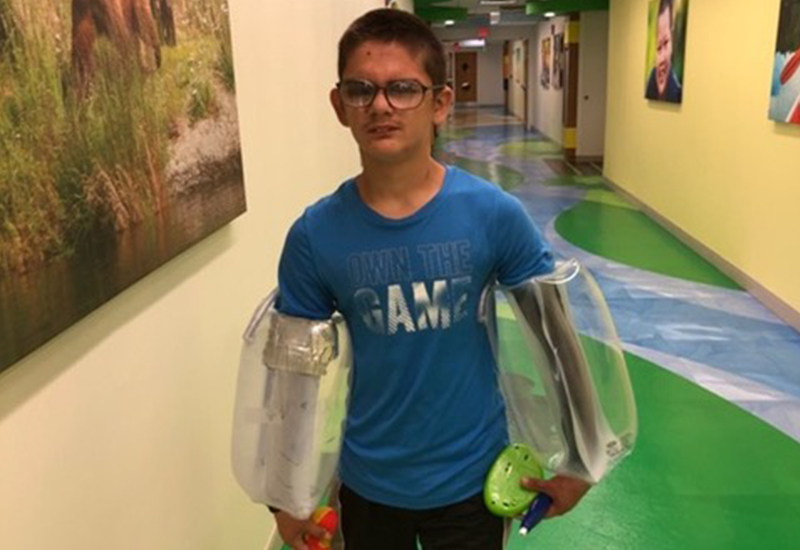